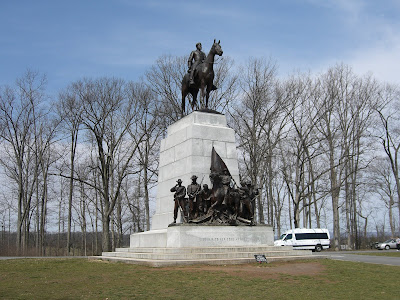 The area can be seen as bright and yellowish today although it once had been a bloody red spot over one hundred years ago. Gettysburg city in Pennsylvania is shining under the radiant spring sun most of the time, daffodils and clusters of saffron bell-flowers that bloom in large amounts make me feel warmer. Covered in bright and yellow colors, the area has the sense of warmness while the actual atmosphere is still a bit chilly. I am perceiving warmness in my heart in such a chilly spot. This place was the setting of a crucial turning point in American history: 8,900 people were dead and 22,000 became disabled in this very area. At the time being, it hosts millions of tourists and visitors annually.

Peter Carmichael, who ushers us into the area, is a professor in civil war study and director of Civil War Institute. He introduced himself as an Ohioan. But his keenness to explain to us about Gettysburg is probably superior even to the locals, I think. He explained how the Army of Northern Virginia (the Confederacy) commanded by Gen. Robert E. Lee and soldiers from the Army of the Potomac (the Union) commanded by Gen. George G. Meade were marching, mentioned the geographical surroundings so that we can visualize the whole event. In every prominent place, he told us the story of the person who belongs to that place and read us a letter of an American soldier who was involved in American Civil War, sent to his family. Then we found ourselves standing in accurate spot that was blanketed in blood during the war, imagining true tragedies, empathizing with the authentic characters of the Civil War story.

The battlefield zone which was one of the important events within the Civil War is wide four acres proximately. In these bare four acres, a single battle occurred from 1 to 3 July. The total toll of dead and wounded of the Civil War was as much as a million. ‘Love for nation, they fought and they died ’, I remember the sentence among the many other words told by Peter.

Although the yellow flowers are blossoming, the trees are still in their bony figures. I am standing in such a place, learning about its blood-stained past and I start to reminisce about my native land where the leaves are green throughout the whole twelve months, the sun shines throughout the whole year. Our native land suffered civil war as well. The people of the same country have to kill each other, these sorts of battles are continuing in our native land. The ethnic groups of the country, particularly from north-east and south-east were attacked by the military junta. In my country, there is not a single day that is not stained by a drop of blood due to battles or land mines. It has been many years; the people from our native land have persistently passed away in silence. The number of refugees who fled to neighboring countries has reached the millions.

I am standing on a bloody spot searching the souls whose bodies were destroyed here,  feeling melancholy. My current presence is thousands miles apart from my native land. I have to note, in both my brain and my heart, how many Americans fought for their mother country, how many died and wounded in the war, which force marched from where and another force had to withdraw by which path and so on. But I am absent in my native land where my closest of kin were destroyed. I haven’t the slightest idea how many were killed there, how many were wounded and when it began. To this point, I feel upset and a bitterness that I am not sure to whom it is directed.

In the battle of Gettysburg, people had to sacrifice their lives, and it resulted in the ending of slavery. Learning from the past failures, it was such a turning point with recovering processes leading to a better future. Its cost was enormous while its historical value also was noteworthy. By maintaining and valuing such a historical place, the next generations have the chance to catch a glance at the history, sense magnitude, and engage in evaluative thinking. Plus, attracting the millions of annual visitors means it also has the practical advantage of avoiding destitution.

We still have to sacrifice many lives in our country though it cannot end any unjust system or any misdeed yet. We are even ignorant of accurate figures of the destruction; let alone recovering from the decline and fall. As long as such places exist, our dream to create the peaceful earth would still be our daydream.

Translated from the Burmese by Tazar

For the original version, go to http://moemaka.com/index.php?option=com_content&task=view&id=8611&Itemid=1

On Splinters and Floods

My friend and mentor often tells me this story – of being allowed back into his office after the bomb had hit Manchester. The IRA blast meant that his publishing house, Carcanet, was closed off, even to him, for months. So what he tells me is this – that for years after he would take a book down from the shelf, open it, and splinters would fall out.

John Biguenet is talking to us in New Orleans. He is talking about levees and lakes and not about Katrina. The difference, he says, is important. It was Lake Pontchartrain that hit, not the hurricane. It gets emotional and is a lot to take in, but one image stands out for me. Again – it is the books. These, destroyed. And heavy, John tells us. You would not believe how heavy a library of soaked books can be.

I am thinking now about books that hold on to the basic evidence of disasters – splinters, and ounces of lake water. I am thinking too, what does it mean to write a book that could drown you, a page that could cut your fingers?

Posted by Kei Miller at 7:43 AM No comments: