Washington, D.C. -- As this all-too-brief tour winds down, I find myself thinking about God. God has crept up on me on this trip, in a rather strange and stealthy way. (Because I was raised Roman Catholic, God to me is, by default, the Yahweh of the Old Testament who sent his son Jesus Christ to redeem humanity.) Although I am aware of the deeply religious roots of the United States, I hadn't expected it to factor so prominently in my impressions.

In Morgan City, Louisiana, I move with a tour group through Mr. Charlie, the first submersible, moving oil rig, wandering through the spaces once inhabited by tough men who lived here for up to forty-five days at a time, doing dangerous and difficult work. The oil rig is now a museum designed to give visitors an idea of how it worked, though its former life as an actual workplace lends it an eeriness, as though its men had merely gone on furlough at the same time. Signs still remind people of rules and regulations, staterooms stand clean and ready for occupants, cooking utensils hang waiting for mess hall preparations. This is a micro-community devoted to seeking out and extracting one of the most precious commodities on earth, its existence defined, controlled, and informed by oil. 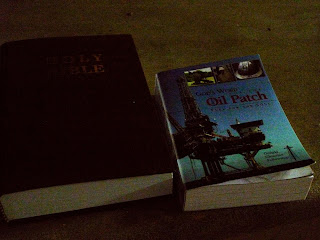 In a dimly lit, long abandoned recreation room, amid a foosball table, TV and VCR, packs of cards and boxes of dominoes, God makes his first appearance on this tour. Comfortable couches range around a coffee table, on which lie two Bibles -- one a generic hardbound volume of the Gideon variety, the other something that looks more like a technical manual. God's Word for the Oil Patch: Fuel for the Soul, it says. It's produced by the Oilfield Christian Fellowship, and inside appears to be a standard Bible in a modern American translation, prefaced by some inspirational material targeted at the men who work the rigs. God is here, I said to myself.

A rather strange place for God to be, this behemoth that moves and acts with sublime power, conquering bayou, river, gulf, and ocean floor. God here is an enabler, granting human beings dominion over the earth and its lesser creatures, entitling them to seek out the fulfillment of a promise -- a reward for faith, loyalty, and service.

God's promise was also the theme of the sermon at the Trinity Bible Church in Lafayette, Louisiana. It's a boxy structure that feels more like a concert hall than a church, reinforced by the band onstage. Members of the congregation are handed a questionnaire upon entrance, the answers to which play into the sermon.

The theme is "Life in Transition: Where is my Focus?" The pastor, a virile, energetic man, walks his people through the questionnaire, tying an episode from the Old Testament to the contemporary challenges facing his flock which, by his own admission, depends on "the oil" for its survival. This is shepherd as motivational speaker, gospel as self-help, and I am reminded yet again of the absolute necessity of charisma in keeping a congregation congregated. Bullet points projected on the cyclorama summarize his affable patter, and he manages to bring his discourse back to the enabling power of Christian rhetoric. We end with exhortations to focus not on people, tasks, or oneself, but on "God's promises," and "God's presence." God is here, as well, the fierce, awesome, vengeful Yahweh who led armies into battle, who would brook no doubt or disagreement.

Days later, we would find ourselves in another church -- the famous 16th Street Baptist Church in Birmingham, Alabama, where the bombing that killed four little girls fanned the flames of the civil rights movement in America. The centerpiece of the church is the Wales Window, which depicts a dark-skinned Christ-like figure in a slightly modified crucifixion pose: one hand outstretched to block oppression, the other to ask for forgiveness or mercy. Running along the lower edge of the window are the words "You do it to me," a paraphrased extract from Matthew 25:40. God is here too. 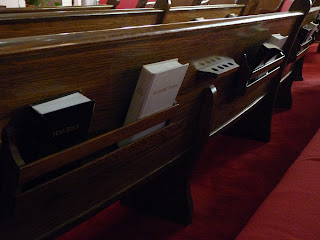 Our guide, the charming T.R. German, doesn't miss an opportunity to extol the goodness of God, and to urge us to honor the mystery of God's intentions and trust in God's wisdom. This seems to be his way of dealing with the problem of evil in the world. Because he is a black man who lived through the days of segregation and the civil rights movement, we press him for stories, personal perspectives on the historical narrative. Race is clearly still a sensitive topic here -- "We ain't going to get into that," he says, though allowing that "The devil is busy" -- but he surrenders everything to Jesus Christ, believing that wrong will be righted in the end. It's a faith that emphasizes endurance and patience, even in the face of persecution. It's a faith that could slide easily into passivity if allowed.

"It's a taught thing," he says, referring to racism as well as respect. The face of God is a taught thing as well, and people learn to see it in many different things. God is everywhere.

As we leave, Mr. German says, "Y'all be blessed." It's a gesture of kindness and generosity that is aware that many people move in unblessed ways in an unblessed world.